One of the things I love about Cape Town is the number of great places to visit that are a quick day trip away. One such example is the cape wine region of Stellenbosch and Franschhoek.

Bright and early one morning, we took got our hired car out of the hotel garage (tip: the valets at our hotel – and most likely yours too – do not receive a salary from the hotel, so tips are much appreciated) and headed on the short, hour-long drive up to Stellenbosch. On the way up, while researching the best vineyards to visit, I came across the most unusual attraction – a goat farm, complete with its own goat tower!

Goats on the bridge – but no troll underneath!

With limited time – and drinking capacity! – we had to prioritise the vineyards we visited, but when I read about the goats, Fairview Wine Farm immediately made the list.

Fairview was all I had dreamt it would be and more. The first thing I saw was a two-storey tower just for the goats. It had a ramp that spiralled up the outside of the tower, and it must have had a twin spiral inside the tower as well, as I saw a few goats peeking out from the shadows inside the tower. 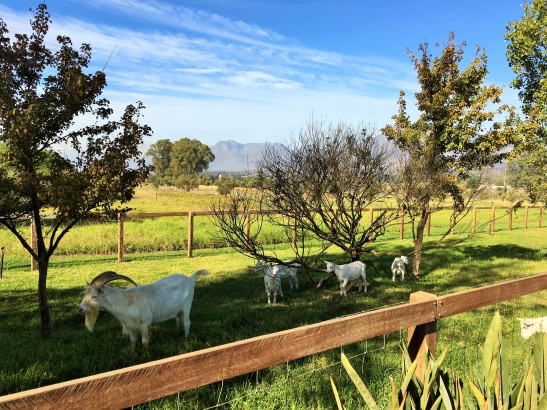 Goats in their grassy pen

The tower was in an enclosure in the middle of the park, but was linked by a fairytale arched wooden bridge to a grassy fenced-off area off to the side. Some goats were hanging out on the bridge, enjoying the bright sunshine, but most of them were in the grassy area under the shade of several large trees.

One goat appeared to be the granddaddy, with an impressive beard and gracefully arching horns to boot.

These animals must have been the most pampered goats on earth. Their grassy pen was huge, with a good balance of sun and shade, and with lots of food and water. But the best part was their little playground, complete with a seesaw, balancing beams, and even a little playhouse.

Goats aside, Fairview Wine Farm had some pretty good wines and cheese as well. They offer cheese and wine tasting, they have a large deli where you can get all you need for a picnic lunch, and of course, you can also buy wine at the cellar door.

This post was inspired by the Weekly Photo Challenge: Unusual.

Open Monday to Sunday 9am – 5pm

My Tweets
Join 1,956 other followers